Looking for a great story about a group of women who are friends. How about a great story set in a historical backdrop? We women have been camp followers for centuries. This one is about our mother’s generation or maybe your grandmother’s generation but it is as timely as our own generation. The men in our lives are still suiting up in a uniform and we are still following them to those cookie-cutter housing units. This is a story you won’t want to miss.

Four women of diverse backgrounds form a bond while en route to join their Army officer husbands in Korea in 1946. Their experiences in a far-flung military compound strengthen three of the women, but a fourth chooses to end her life there, and during a reunion twenty-five years later, long-held dark secrets and sorrows are revealed. 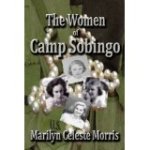 The Women of Camp Sobingo, by Marilyn Celeste Morris, a member of the Oklahoma Writers Federation, Inc., shares the story of four women; friends who share the life of army wives in a strange land, with husbands who serve. Raising children, making do, enduring hardships, these women survive – all but one…

There really was a Camp Sobingo, located outside the capitol city of Seoul, South Korea at the end of WWII. This military compound with its cookie-cutter quarters was home to the women and children who joined their Army officer husbands during the US Occupation. The camp had a school, a post exchange, a dispensary, a commissary, and even a movie theatre (think MASH). Ever-present, however, was the military presence, both Korean and our own US forces and the tyranny of the Russians located across the 38th parallel, who merely annoyed the dependents with their random denial of electricity to the American contingent.

Most of the Americans had deployed to other assignments before June 25, 1950 when North Korea invaded South Korea. Those remaining escaped safely, but The Land of the Morning Calm would never be the same.

To learn more about the author and her book go to http://www.vanillaheartbooksandauthors.com

Dianne G. Sagan has written over 25 books and more than 300 articles in her 20 years as a ghostwriter and published her own work traditionally and indie. She writes fiction and nonfiction. She's an experienced speaker at writers' conferences in the region and an experienced facilitator for writers classes and workshops.